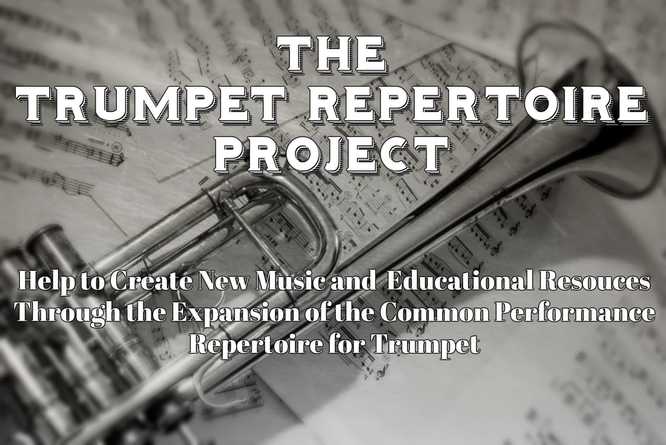 Overview of the Project:

**It is official!! The Trumpet Repertoire Project has been fully funded as of the spring of 2018 thanks to the one of the University of Utah's prestigious Dee Grants. The composers and Dr. Shelton have officially began collaborating on the new works, and will be releasing updates on their progress very soon!**

** A huge thank you to all who helped make this possible! **
GOAL:
The primary goal of this project is to commission NEW WORKS that not only represent the voices of modern American composers, but to have these works provide viable additions to the common performance repertoire  for collegiate-level students. These works are not meant to replace pieces in our standard repertoire, but rather add a refreshing crop of new modern works that will encourage growth and musical development of young performers.

Once these pieces have been commissioned, these will be recorded and released on a CD. This enables students to gain a better understanding of the compositions, and to encourage more students to study and perform these new additions to the repertoire.

BACKGROUND:
In the late 1940's, the National Association of Schools of Music (NASM) began a commissioning project to help to fill a gap in collegiate brass repertoire. This project produced several works, specifically for the trumpet, that have become staples in the common performance repertoire. These works represented the American compositional voice in a time when repertoire was limited for certain instruments.

A similar scenario had occurred at the Paris Conservatory since the late 19th century. Each year, composers would create new works for instrumental studios that would then be used as graded performance pieces. This meant that each member of a given studio would perform that new composition for a grade. The act of composing new works each year, or Concour Pieces, went on into the late 20th century. A large portion of the standard repertoire for trumpet and piano has come from this annual event at the Paris Conservatory.

Since the 20th century, many newly composed works have made their way into the common performance repertoire for trumpet. Many of these compositions contain valuable elements that help solidify their place in the standard repertoire, but few exhibit all three characteristics that enable them to thrive in both collegiate and professional repertoire. This project will allow a new wave of repertoire for the trumpet that embodies the modern American voice, and reinforce the musical and technical aspects of 19th and 20th century Solo de Conours.

PEOPLE INVOLVED:
Like any project, the final outcome of any collective effort is dependent on the quality of the individuals working together. This project is brings together several outstanding American composers whom have made their unique mark on the musical world. Read more about each composer involved below. ​